Directions:
From the junction of state Hwys 206 and 43 in southwestern Boone County, go SOUTH on Hwy 43 up Gaither Mountain and along the ridge into Newton County. Just before you reach the community of Compton there will be a yellow road sign denoting the Compton Volunteer Fire Department. Slow down because the turn is the next road on the LEFT. This is right across from the fire station which is back from the road a bit. Follow this rough gravel road down the hill till you come to a creek crossing the road. There are two places to park here. Just before the crossing, back up around a curve, there is a pull off on the LEFT big enough for 6 or 7 cars maybe. And the other is just over the crossing there is a tiny pull off on the left, there should be private property and no hunting signs here. In both cases, the land to the upstream side if the road is private, and down stream to the Buffalo National River.

It had rained at least once a day for three consecutive days in mid week so Saturday, the ninth, I decided to go see Paige Falls and Broadwater Hollow Falls near Compton in Newton County. I lolly-gagged a bit and didn’t leave till almost two. This turned out to be a great decision.

It was starting to get dark in the southwest as I jumped into the truck to start the trek, and by the time I arrived the sky was overcast and threatening rain. After eyeballing the sky, I decided it might pass to the south and grabbed my pack and went to the trailhead at the low water crossing.

This trail is not maintained by the Park Service, but to the falls and a large sinkhole just beyond is a fairly well beaten path. A word of caution here: the trail follows Broadwater Hollow downstream, eventually breaking away from it, and reaches Cecil Creek and a nice little camping spot. Here the trail follows Cecil Creek to the right, crosses Broadwater Hollow just upstream of the mouth, and continues on a little farther to a “T” intersection. This is the Cecil Cove Trail with the trailhead at Erbie about 2.2 miles to the left. A few years back, also in August, I managed to lose the trail on my way out. I spent an unwanted night in a creek bed with no water to drink. The next morning I had to make the hike to the Cecil Cove Trail, on to Erbie,where I managed to get enough signal to make a call to have the Rangers give me a ride back to Compton. The trail had disappeared down towards Cecil Creek and I didn’t mark it in anyway, nor did I look behind me to see what it would look like on the way out. Since that time I bought a water filter and I now carry florescent pink surveyors tape to mark the way when it vanishes. August can be very overgrown and small primitive paths like this can become obscure so take so precautions and be prepared.

The trail heads off into the woods on the downstream side of the slab and very quickly overlooks Paige Falls down on the right. There is a path heading down to creek level to get good views of the falls. Paige Falls is named for Paige Slape who died in a terrible car accident at age 17. The creek has worn a narrow slot in the rock that the water runs through and over the lip into a pretty good sized pool when the water is up. 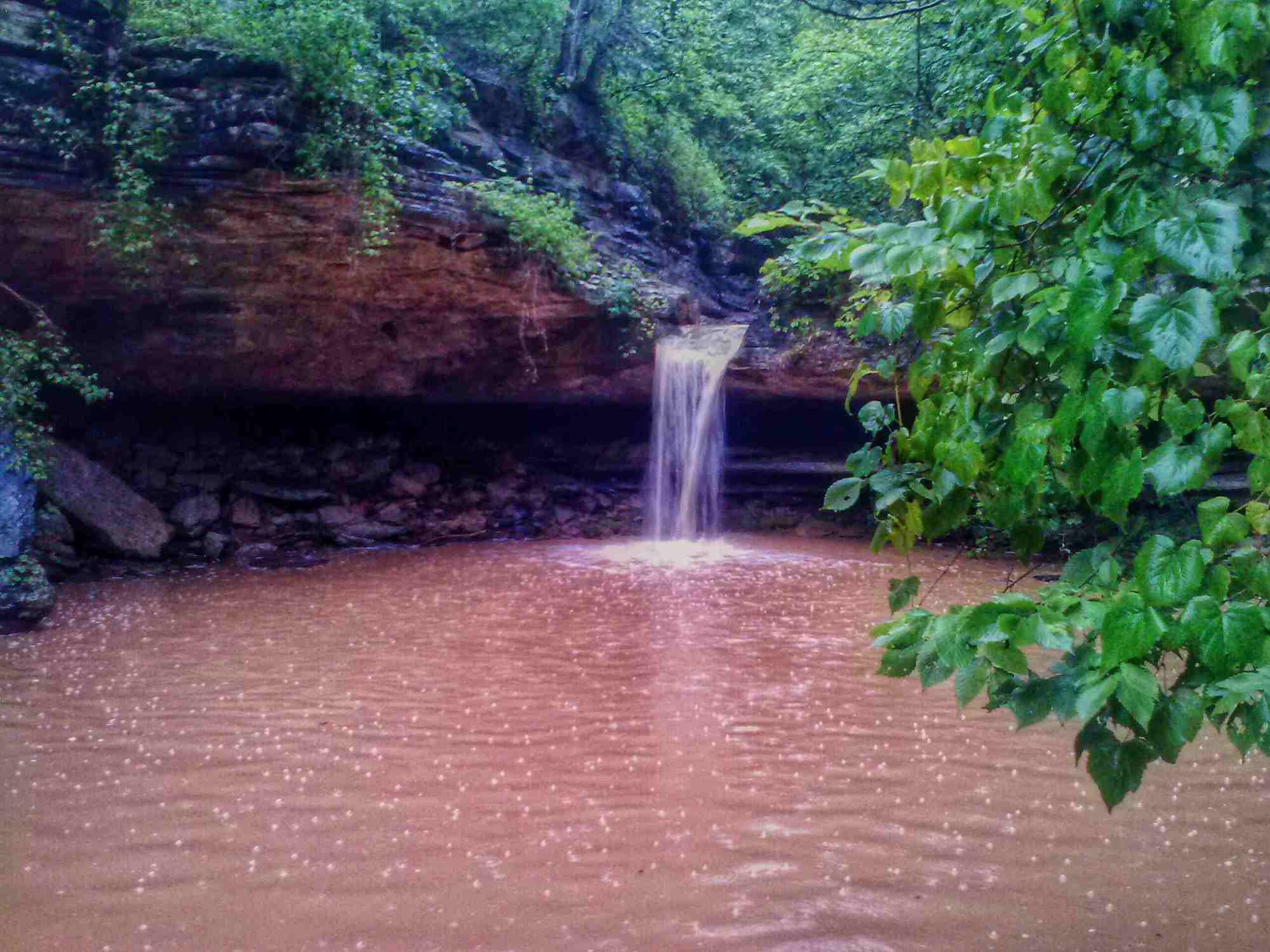 I had just gotten to the bottom of the falls when the wind picked up and the thunder started. So I packed everything I didn’t want to get wet into the dry bag in my pack an hustled the fairly short distance to the truck to wait out the lightening. Almost two hours later the rain had slacked and the lightening over, I donned my poncho and headed back to finish my hike.

There wasn’t much water running when I got there the first time, but now after almost two hours of pretty heavy rain, there was a decent flow of water running. I didn’t know it till later on that evening that the weather service issued a Flash Flood Warning for the area. Lucky me.

I finished taking a few photos of Paige and headed back up to the trail, turned right and headed farther downstream. Broadwater Hollow Falls is the next waterfall downstream, and not very far. At 21′ it is a pretty sight when the water is up. There is also a path leading to the bottom of the falls here.

After a few pics, I headed up to the trail and looked around for the way to the last stop for the day, a large sinkhole cave. I do not have GPS for the sinkhole, it was too cloudy for a reading. But it is in this immediate area. Look around for two large blocks of rock with a narrow corridor between and follow it up hill a bit and it should lead pretty well right into the face of the sinkhole. It is a gaping hole in the earth that water can be heard dripping down below. A narrow path leads most of the way around. Be careful as this sinkhole looks to be very deep and a fall into it could be fatal.

After some pics I headed up the path to the truck and called it a day. I was soaked in sweat from the poncho, probably as wet if I hadn’t worn it in the light rain.

Broadwater Hollow makes its way to Cecil Creek pretty steeply, falling and tumbling and cascading down the hill. It is a wonderful spot with many more things to see than mentioned here. Just make sure if you venture farther down to keep an eye on the trail so an unwanted night in the creek bed isn’t necessary.

A good hiker practices Leave No Trace, so while out take only photos and leave only footprints.